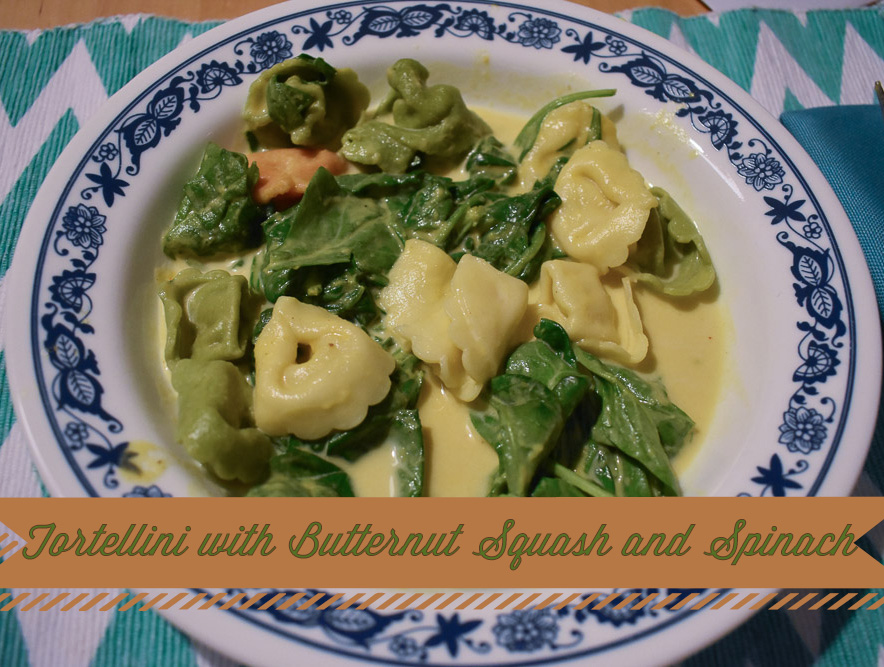 For the longest time, up until my mid-twenties, I had only a tenuous grasp on the concept of seasons and what that meant for fruits and veggies. The year was spit into two halves: one comprised of summer and spring, when all the good stuff showed up, and one comprised of fall and winter, which was when the world became a barren wasteland devoid of anything fresh except apples and pumpkins for about a month. That’s because their freshness was irrelevant to me: veggies were freezer food, anyway.

However, if you spend any time at all on Pinterest or reading food blogs written by people with a substantially tighter grip on reality than I have, then you know that this is not really true. You also know that, come late fall/early winter, it’s all butternut squash everything. That’s how this recipe pulled me in: a winter veggie cream sauce with tortellini, one of my favorite things in the world? Let’s do this.

This recipe from Julia’s Album, while tasty, had a few flaws and suffered also due to some corner-cutting on my part. First of all, the original recipe calls for homemade squash puree, with separate detailed instructions on how to make it. Yeah, no. Two things: I read the recipe too late to figure this out, and even if I hadn’t, I didn’t have time to oven-bake a squash and then puree it. Instead, I went with baby food.

Yes, baby food. After all, that’s all it was: squash puree. What could go wrong?

Well, the flavors were there but the sauce was quite runny, I imagine because there wasn’t a hearty, pulpy puree (my bad). I also made my own half and half for a mix of whipping cream and 2% milk. For the people on my wavelength: all is not lost. The sauce can always be thickened.

One other issue I had: the spinach didn’t wilt properly, so if you’re having this problem, I’ve included instructions to avoid it. I think there was way too much spinach so I halved the amount for this recipe. If you like your pasta leafy, add more in.

Read on for some handy instructions, and a recipe that will leave you satisfied and not sluggish.

Sweet, savory, and... leafy. (Pictured: way too much spinach)

Writer, enthusiast of many things, perpetuator of snarkitude, Jersey girl (those last two might be linked). With all these powers combined, I... have a blog. View all posts by Maggie